This is the hardest economic climate ever. We didn’t vote for them. Our parents ruined the world. Everything is so fucked up. I’ll be lucky if I ever own a house. College and university costs too much. I’m unmotivated. I can’t afford anything. It’s never been harder to get a job. That’s offensive/racist/prejudiced/unjust/unfair. The 1% control all the money. Success is kept secret from us. I’m not privileged enough to succeed like that. Only immoral people succeed. Money is the root of all evil. I’m too nice. I can’t afford to invest. JESUS. CHRIST.

Those were a list of excuses that I heard, that I can remember off the top of my head, from hearing a bunch of people whine about the situation they’re in.

It was at a party recently, listening to a few “friends of friends” talk about the world today. I genuinely heard someone say that the “world needs to wake up”.

I’m also a part of a group of individuals who want to start businesses. Like that’s a magic key to making money. But when they’re told how hard they have to work, for how long and for what end, their enthusiasm drys up.

If you’re a millennial and you think success is out of your grasp, read this. Because it’s not and you’re acting like a little bitch.

First, I totally agree that there are absolutely some of us who don’t act like this. I know loads of guys and girls my age who don’t winge and bitch about the situation they’re in.

Talking to someone who doesn’t make excuses is frankly, pretty rare. “Oh I couldn’t do that, the economy isn’t right” or “it’s easy for you, you have no commitments”.

I don’t know what happened in the 2010’s but people started throwing excuses around for not doing anything. Worse than that, everyone else seemed to accept it or worse still, encourage it!

I’ve heard teachers say to kids “you’ll have a tough time when you get out there” or “the job market doesn’t look too good”.

HORSE. SHIT. The job market has never been better. There’s more money than ever and it’s easier than ever to make a living for yourself.

If you’re unmotivated at work, or if you find you’re lazy, it’s because you’re not willing to make yourself uncomfortable. You have no desire to start working hard and achieving something.

Fear is what’s preventing you from being successful, or making money, or getting a job. Nothing else.

We have it easier than ever

The biggest lie we tell ourselves, is that we have it hard. That the world is harder than ever.

I’ve never heard such a blatant disregard for progress in my life. It’s fucking disgraceful.

In the Western Hemisphere, we have it easier than ever. Libraries, Wikipedia, the internet, free school, cheap laptops, smartphones, vaccines, 24 hour gyms.

Even Third World countries are better off than ever. Is there still work to be done. Absolutely, 100%. You know who’s doing that work? People who don’t fucking whinge and whine.

There’s an awful lot of negativity in our environments and shown to us in our day to day lives. Social media videos, the news, the papers and wider media seems to show a slow but measurable and inevitable decline in our society. Both globally and locally.

The negative news and influence isn’t coming from where you think it is though. More and more I see statuses, posts and videos on how awful and messed up our world is.

Dying children, natural disasters, crime, racism, terrorism and human rights abuse litter our feeds and outlets so it’s understandable that we would assume that the world is going to hell in a handbasket.

Sure, The Independent reports that there are only 11 countries that AREN’T in conflict at the moment. But they measure that by showing if a country has had at least 25 battle related deaths a year. https://www.independent.co.uk/news/world/politics/world-peace-these-are-the-only-11-countries-in-the-world-that-are-actually-free-from-conflict-9669623.html

With those statistics, there are cities across the globe that have higher conflict rates than entire countries.

In fact, fewer people die from wars or violent crime now, then ever before. Violent deaths have been in decline for hundreds of years and violent crime itself is at its lowest point since the 1970’s https://time.com/3577026/crime-rates-drop-1970s/

But FEWER people are dying every year and that’s just not being reported.

Even including recent shootings in the US, from 1972 to today, terrorist motivated deaths account for 3160 deaths https://www.thereligionofpeace.com/attacks/american-attacks.aspx

Appalling by any standards, but that’s fewer than 72 deaths a year.

Diabetes killed 76488 people in the USA in 2014 https://www.cdc.gov/nchs/fastats/deaths.html

Natural disasters are something that the media loves to share. Low income, third world countries struck by forces of nature make great people stories. The number of natural disasters is pretty static, roughly 380 a year https://thewatchers.adorraeli.com/2014/09/24/the-statistics-of-natural-disasters-2013-review/

What does that mean? It means that we’re more capable, willing and reactive to natural disasters. We plan better and protect more people now than ever before.

People, governments and countries are held accountable to protect the society and we do it.

As users of social and media, we are perpetuating the very news and events that depress us. Studies show that news is easy to digest and similar to sugar, we become addicted to it – but it makes us depressed https://www.theguardian.com/media/2013/apr/12/news-is-bad-rolf-dobelli

Misery loves company and we’re only sharing what makes us miserable. But then we moan that the world is full of bad people.

Nigeria, the largest country in Africa has recently elected Muhammadu Buhari in a democratic election, beating out Goodluck Jonathan who hadn’t been elected previously.

But the news focuses on Boku Haran and the deaths caused by their “terrorist operations”. The truth is that most statistics can’t agree on what constitutes a terrorist related death, violent crime or other deaths – so they’re all lumped in with terror related deaths.

Nigeria’s death rate has been falling since 1960. Infant mortality – down. Death by war – down. https://knoema.com/atlas/Nigeria/Death-rate

This is more of a rant than I was expecting, but there are so many positive and incredible stories to share. We all think that we don’t trust the media and “they’ll write any headline to sell newspapers”, but then we share what we are shown and treat it as gospel.

We can go out an find stories of a man cured of HIV https://www.iflscience.com/health-and-medicine/scientists-closer-understanding-how-berlin-patient-was-cured-hiv/ or how maternal and neo-natal tetnus has been eradicated in India https://www.searo.who.int/mediacentre/features/2015/maternal-and-neonatal-tetanus-elimination/en/

Anyone who has watched “Hans Rosling: Don’t use news media to understand the world” will see I’m taking his content, but it remains that we can either choose to discover stories that are positive and show progress.

Or we can buy exactly what we hate about corporate and large media stories, perpetuating misleading facts.

Absolutely I understand that terrible things happen. There are wars, there are acts of evil. But there are also people doing great things out there and we have statistical PROOF that things do get better and there are people working to make life better.

We have a choice of what we consume, so why do we share cancerous and depressing events before researching?

Rather, we should seek out exciting, progressive and positive stories.

You’re either a victim or you’re not

Would you put “victim” on your card or social profiles? Unless you’re a real attention seeker. Probably not. So why are we so happy calling ourselves that?

Why are we happy to label ourselves as victims when something happens to us? “Oh it’s not my fault, I can’t afford a car”, “oh it’s not that easy, we can’t all make money”.

Victims live their entire lives having things happen to them. Other stuff, outside of their control, happens to them. It happens often and it’s never, ever their fault.

Before people jump on the attack and unprovoked atrocities that can be committed, I’m not blaming the victims. Attacks, assault, bullying, these are all unjust and awful things. However, most people that experience them would be happier and more motivated to move away from the label of victim.

Even things we take for granted, or things that are supposed to be good for us, can cause people to fall into a victim mentality.

“I have to go to Uni, my parents will be mad if I don’t”. If you’re not willing to tell your parents, family or other people to fuck off and stop forcing you into something, then you don’t deserve freedom.

It’s simple, if you moan about being controlled by others or having things happen to you, but you’re not willing to change. Even it’s uncomfortable, then you won’t ever be successful. And frankly, you don’t deserve success.

Success is something that happens because of you 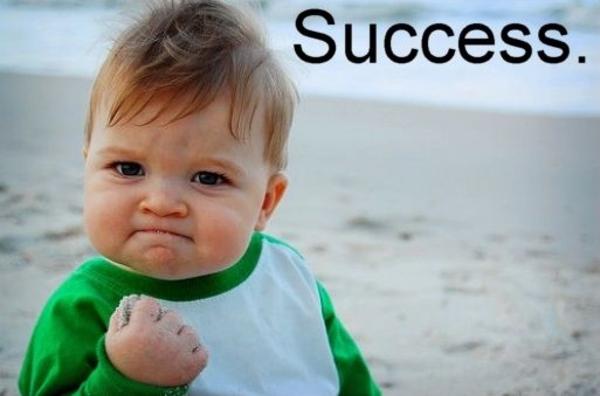 Success isn’t a level or age that you reach. It’s something you decide to be today. When you decide to work two hours longer, or give up comfort, or eat better, you’re a success then. People who are successful have the same habits TODAY as they had 2 months, 2 years or 2 decades ago.

The greatest insight into how you’ll do in the future, is seeing what you’re doing now. The present is the greatest indicator of your future. If you’re not making decisions, habits and choices that a future successful version of yourself makes, how are you going to reach that future?

When people are asked “did you ever think you’d be this successful?” we’re taught to say “Oh it’s so magical. I didn’t ever think I’d make it”. Bollocks.

Every successful person who has got where they are, has done so because that’s what they’ve been aiming for.

You either do something about it, or keep being a little bitch

There is absolutely no one stopping you from being a success. If people are negative, if you’re getting criticism, if people tell you it can’t be done. That’s all they’re doing. Telling you.

You can either listen to them and stay where they are, unhappy and unmotivated. Or you can change who you listen to and what you believe. It’s too easy to listen to other, negative feedback. But that’s usually the sign that you’re heading in the right direction.

As children, we’re all to eager to try new things. To say what we’re going to do or what we think. Over time we’re told that we CAN’T or SHOULDN’T. We’re taught to not be a success. Usually by those who have never even attempted it.

I know of a teacher who told a girl (family member) that she should stop trying to ask and answer questions. Needless to say I was furious, who tells a kid to stop learning!? Their excuse (there’s that word again), was that the other children need a chance.

So the teacher’s idea was that other kids are going to catch up by going SLOWER than somebody else? What’s an even greater shame is that that teacher probably would like to encourage more kids to be like that. But government interference means we change how we teach kids.

You’re born with an inherit ability to challenge your own beliefs and perceptions. As a kid you’re naturally comfortable with learning and being uncomfortable. You want to see what can be done, what you can do. But it’s beaten out of you.

Stand up, push back and stop listening to negativity. Simple as that. If you’re happy to perpetuate negative and incorrect news, you’re part of the problem.

Absolutely nothing to do with marketing funnels or business this post. I just want people to know they CAN achieve what they want. I think you’re capable of SO much it’s unreal. Way more than you’re giving yourself credit for.

Shit economy, no internet and no education has created some of the most incredible inventions in human history. You don’t think Ford, NASA, CERN and MicroSoft had problems? Where would we be if they listened to negative people.

Too much rhetoric? Let me know in the comments below.